All Warriors Have Scars

A scar is yesterday. It is the corpse of a memory too sharp to be forgotten. And Zanthia’s body was a graveyard.

Her olive face, handsome yet delicate, bore a slash from her brother’s axe. Arms, back, and legs too were cloaked in tough mutilated flesh that told of her bravery, her loyalty, her glory and not least of all, her suffering.

The bullet wounds were new and the sight of them still struck her with a cold pain. Six of them, potted into her shoulders and her thighs like bubbling heaps of melted wax.

She had traveled on for some time, hoping that the marks would heal. Regarding them as healthy, living tissue in a brief phase of ill, but skin is never the same after it is broken. It cannot feel. Instead, it sits flaccid, trying hard to imitate the smooth rosy shade of life. A tombstone in a garden of blooming nerves.

She remembered the Elven sorcerer, Elanil. Her delicate features, her piercing blue eyes, the sound of her screams as the wraiths drained her magic the day that Voshla turned against them. There had been too many men on the battlefield that afternoon. Zanthia could not protect her. She could not save her. How foolish she had been to believe she had found a new family.

But, where would she go now that she had seen the limits of her power and the cowardice of her companion?  For the time being, the innkeeper Arkurius Tillman had offered her room and board in exchange for security. As it were, there had been nothing to do but drink and remember how her heart had betrayed her; today was no different. Zanthia planted herself in a corner of the tavern and watched as the patrons stumbled through.

After her third ale, she noticed a pink-haired gnome bard at the far end of the bar, her large eyes staring intently, awaiting Zanthia’s permission. The moment their gazes locked, the gnome smiled widely, and started toward her with a swift and clumsy walk. Getting into the tall bar stool was a struggle for a creature with such short stocky limbs, but Zanthia held back her laughter.

The gnome extended her hand. Angie was her name and she seemed insistent on getting acquainted. She lifted her hand to the barkeep, signaling for two ales and turned her attention back to Zanthia, who dismissed her coldly:

“Return to your bardic songs, gnome. I wish to drink alone,” she said.

The gnome offered a knowing look and after bracing herself, she continued with both caution and sincerity: “I will leave if that is what you wish, but I have been watching you and you must know that we are not so different. I come here for a reason. I understand what it is like to be the only one of my kind, to fail the ones I love, to drink until I am a stranger to myself.”

Zanthia did not react well to the possession of forbidden knowledge. This creature was a danger to her. She readied her great sword for a swift decapitation. Angie raised her hand slowly and spoke with authority. A cool light emanated from her center: “Do not fear me, Zanthia. I come as your guide and creator, brought to you by ally not foe. Destroying me will mean a more final end than you could imagine.”

Zanthia pressed her blade against Angie’s neck firmly enough to draw a single drop of blood. Through gritted teeth, she spit a threat, “Tell me now, who wishes to enchant me and I promise to make your death a painless one.”

Angie’s eyes grew large, but she was not afraid. In this moment, a gentle warmth breathed into Zanthia and she knew the scars on Angie’s spirit as she knew her own– A dead father. A mother driven insane by neglect and abuse. A childhood steeped in loneliness and isolation.—She was reminded of herself, had time been less violent, but equally painful. Just then, Zanthia spotted a pale blue pendant of summoning against Angie’s breast; there had only been one in all of Golarian, and it had belonged to Elanil.

She paused and lowered her sword. And then with broken hope she pleaded, “ Gnome. You are sent here by the great Elven sorcerer, Elanil. Speak the truth; does she survive? Has she sent for my help?”

Angie’s face sagged into a frown. She looked into her ale and imagined drinking it down. She thought of all the deaths it could help her forget, and she wondered if it was more painful to know or to remember. She spoke once more, hoping that this time, she would be heard:

“ We can never be assured of a happier future, and I know all too well that no magic can bring your family back. But know that Elanil is within you, and for as long as you live, those who meet you, will also be meeting her.

It is true you could not save her, but if you accept it, she can still save you.”

Angie slid off her chair and onto her feet. She approached Zanthia carefully and they embraced. An icy wind enveloped her and she remembered the sound of Elanil’s heartbeat. Her eyes opened and Angie was gone, the ornate pendant left where she had stood.

Zanthia wandered out into the street, her great sword sheathed on her back. Somehow the deformed lumps upon her body seemed different; they reminded her of who she was, of what she had overcome.

All warriors have scars; Zanthia would not make the mistake of living in the pain of them. Morning was the best time to travel, but the sun was setting now. She jumped onto her horse and began to ride.

She did not know where she was going.

The Walls We Are Inside

For the man who doesn’t need me,

I am a million wanting hands growing from stones

and impenetrable to sprout

Against me, an ocean.

It is a mirror

unconcerned with the self I want to see

I am facing the wrong direction

I am an open mouth

It is then, that wet and dry are the same to a wanting body

is in a difference I refuse to know.

If only I could sink beneath the water

where his eyes are.

Would I know him then?

when her elbows grind into the gravel

in the world with the rest of them.

She is the bringer of motion

of lightness and music–

But when the faint moonbeams recede,

she is a hardened lump of throbbing thighs

and sleepy hands wrapped up in sheets

longing for the comfort of

eyes to tell her that

“The Gymnast” by Angie Hoover-Hillhouse

This piece will be featured in an upcoming stage production called Cat-Fight, which explores  the complexities of womanhood!

Support Women in the Arts! Donate to CAT-FIGHT ! 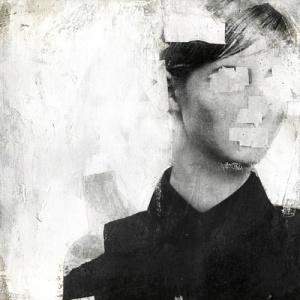 No hands to grasp

–so that the world

will never get in

-“Where I am Today” Angie Hoover-Hillhouse

Cinema Surreal: The Cat with Hands

A few nights ago, I was lucky (or unlucky) enough to view this horror short. It is about a cat who lives in a well and steals human body parts so that he can become a man. The film is loosely based on Mit Romney’s Life Story

I buried my eyes

where her blue body lies

They draped her in petals

as white as the moon

to soften the sins

With the Princess by Angie Hoover-Hillhouse

rusts in a steaming haze

Art Mash: You Have Something on Your Face 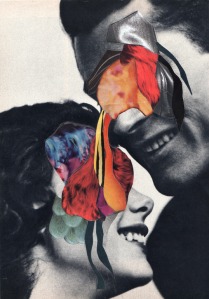 fall into smiles of stupor 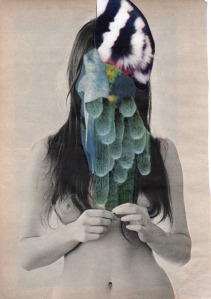 yet the rubies violets peaches and maroons

teal is well suited to time

the beauty of the blend

“Beauty in Blend” by Meaghan Merrifield

Girls on Film: Re-evaluating Nostalgia in The Great Gatsby

Last night I attended Doug Benson’s Interruption of The Great Gatsby at The Cinefamily. I hadn’t seen the film, but had heard that it was a big, awful mess designed to win over young viewers with brain-numbing hip-hop music and party culture extravagance. I couldn’t wait for the mocking to begin. But something unexpected happened between Benson’s “Does this movie take place on Earth?” and Thomas Lennon’s “Can anybody tell me who that character is? For a million dollars? Anyone?”…. 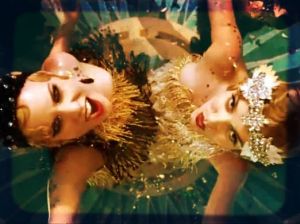 Like a lot of people who heard about Luhrmann’s Gatsby before seeing it in a theater, I went in expecting to be offended by the off-base portrayal of the Jazz Age. Because I admittedly adopt the type of unfounded nostalgia that no person my age should. As the camera swooped into a lavish hotel room and the thumping bass of club music played over the speakers, my instinct was to say “Hey! THAT’S NOT HOW IT WAS! ” But I realized then, that I had no right to think that because all my ideas of The Jazz Age are based on images from Boardwalk Empire and Betty Boop.

It’s true that the emotional nuances of the original story are stomped on by Luhrmann’s signature vulgarity. And it’s true that he made Gatsby’s house look like a rap music video, but when we strip it down isn’t Gatsby an excessively rich dude who throws parties littered with drunk girls, booming music, celebrities, and free booze?…  The interpretation isn’t exactly off the mark.

Luhrmann’s movies are often panned, but I really think that he has a talent for showing that young, stupid people are young and stupid no matter what backdrop you throw them against. We want to believe that we’ve missed out on something. That superficiality  is just the oozy afterbirth of the 1980s and that our beloved Jazz Age was better than whatever we’re living in now. But the shallowness that we criticize without restraint in our own time, existed without question, in the times that we idealize.

It was not a tale of disillusionment ..or the hopelessness of time, but I left the film wanting to understand my attachment to worlds that can no longer be accessed and my need to believe that  the magic so absent in the world today existed decades ago.

claw has sprouted from the

neck of my favorite lace gown.

At first, it was a pool

as bright and red

as a freshly skinned knee–

under the hanging tangerine fog of a Sunday afternoon,

“The Grim” by Angie Hoover-Hillhouse